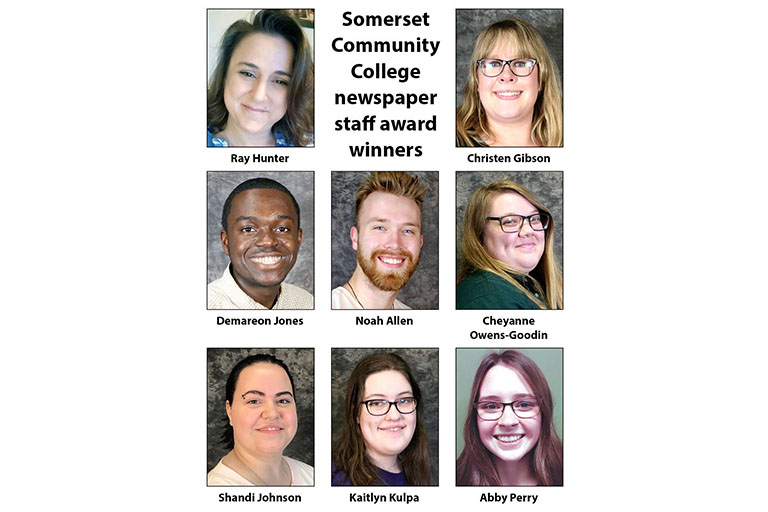 For the second consecutive year, The Bridge was awarded third place in General Excellence, finishing behind Murray State University’s The Murray State News and the University of the Cumberlands’ The Patriot in the Student Publications Class 1 category (schools with fewer than 10,000 students).

It is the fifth consecutive top-three finish in General Excellence for SCC’s The Bridge, following a first-place award in 2016, second-place awards in 2017 and 2018, and a third-place award last year. The lone community college newspaper to have competed in the past five KPA contests, The Bridge and its staff has garnered a total of 71 category awards.

“We were blown away by this year’s contest results,” said Stuart Simpson, one of The Bridge’s two faculty advisors. “The students nearly doubled their total from last year [nine]. We did not expect that, but it’s a testament to the staff’s talent and hard work.”

The contest judges said that Hunter’s columns demonstrate “bold, creative writing, with an especially strong voice,” adding that “The column on alcoholism is powerful, as is the one comparing Trump to a feature in a Greek tragedy. Tremendous writing!”

Hunter also shared an award with Christen Gibson, who succeeded Hunter as The Bridge’s managing editor for the fall 2020 semester. The two were awarded third place in the Best Front Page category.

The contest judges called the group’s multi-article, multi-semester coverage of the COVID crisis “an excellent series dealing with Somerset Community College’s efforts to continue the educational process in the face of a highly contagious virus.”

Gibson was singled out for her COVID coverage in the Best Enterprise Story category, winning a first-place award. The judges said that “COVID-19 is the story of 2020, and Gibson’s article, written in September, straightforwardly demonstrates its insidious nature.”

Abby Perry received a second-place award in the same category. The judges were effusive in their praise of Perry’s article on the public’s reaction to the death of a basketball superstar in January 2020.

“Hero worship has been around for centuries,” they wrote, “yet the phenomenon of today’s demonstrations of thousands mourning is a product of the instantaneous coverage of a celebrity’s death – in this case, the fatal helicopter crash that took the life of Kobe Bryant and his daughter. (Perry’s) article does a good job of looking into what triggers such responses.”

Owens-Goodin and Jones shared a first-place award for Best Breaking News Coverage, with the judges saying that their entry “had the broadest reporting and felt the most comprehensive” of all of the submissions they evaluated.

Jones, among his total of four individual or shared awards, also received a third-place award in Best Feature Photo. The judge had this to say about his entry: “Angle is very good. Shows a lot more than a guy sitting in a theater. Solid work!”

Gibson, Allen, and Jones shared a third-place award in the category of Best Video for The Bridge’s podcast series The Gateway. The trio produced and hosted multiple episodes of both The Gateway and its sister series, Table Talks, during the fall 2020 semester.

Rounding out her total of five individual or shared awards, Gibson also won a second-place award in the category of Best Use of Social Media, with the judges highlighting her “Motivational Mondays” feature.

Shandi Johnson took home two individual awards: second place in the Best Columnist category and third place in Best General News Photo. About her columns, the judges wrote that “Shandi writes with a lively, engaging style. Her column on the cemetery is especially interesting and powerful.”

Bridge Assistant Editor Kaitlyn Kulpa picked up a second-place award in the Best General News Photo category, with the judges asserting that her photo was “taken from the perfect angle.”

Finally, Allen, who won a total of three individual or shared awards, received a Certificate of Merit in the Best Graphic category.

Jeff Harris, the Bridge’s other faculty advisor with Simpson, said he was “thrilled” with the contest results and was especially pleased with the number of shared awards the staff members received.

“Over the past couple of semesters, we’ve had some of the more ‘team-oriented’ staffs we’ve had in a long time – maybe ever,” Harris said. “They’ve been big on sharing one another’s load, on working together to get things done. So it’s nice to see so many of their collaborative projects receiving recognition.”