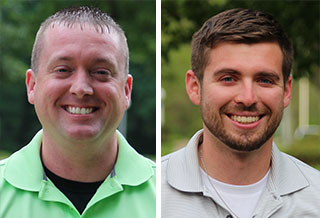 The two students selected to represent SCC on this year’s team are Jeremy Darnell of Russell Springs and Logan Simpkins of River. Jeremy Darnell holds a Bachelor of Arts Degree in Biology from Lindsey Wilson College and serves as president of his class.  He served as the student coordinator for the program’s participation in Operation Christmas Child, volunteered to assist with free health screens at the Kentucky Special Olympics and participated in fundraisers for the March of Dimes.  He served as a co-coordinator for the program’s participation in the Marquette Challenge, a fundraiser for physical therapy research, with SCC being named the “Most Successful PTA Program” in the United States in 2018.  He received SCC’s Student Leadership Award in April.  He is the son of Doug and Rebecca Darnell of Russell Springs.

Logan Simpkins holds degrees in biology and business administration from the University of the Cumberlands and serves as vice-president of both his class and SCC’s Physical Therapy Student Organization. He serves on the program’s advisory board and is a member of the SCC Student Government Association.  He is active in a number of community activities, including fundraisers for the March of Dimes and Special Olympics and participated in SCC’s Monster Bash in 2017. He was the recipient of the 2018 James H. Anderson Award, based upon a first-year program student’s potential contributions to the physical therapy profession and the community. Simpkins is the son of Randy and Jennifer Simpkins and plans to work in eastern Kentucky following his graduation in 2019.

Members of the KPTA All-Academic Team will be recognized at the KPTA Conclave in Louisville, Kentucky in September and will receive cash scholarships.

For information about the SCC PTA Program, contact the program director at ron.meade@kctcs.edu.