Starting Friday, November 20 at 5pm our courses will be moving to online instruction. For more information, including a list of exempt classes, check out the latest update from Dr. Carey Castle.

SCC is Preparing Students for High Demand Jobs in Manufacturing 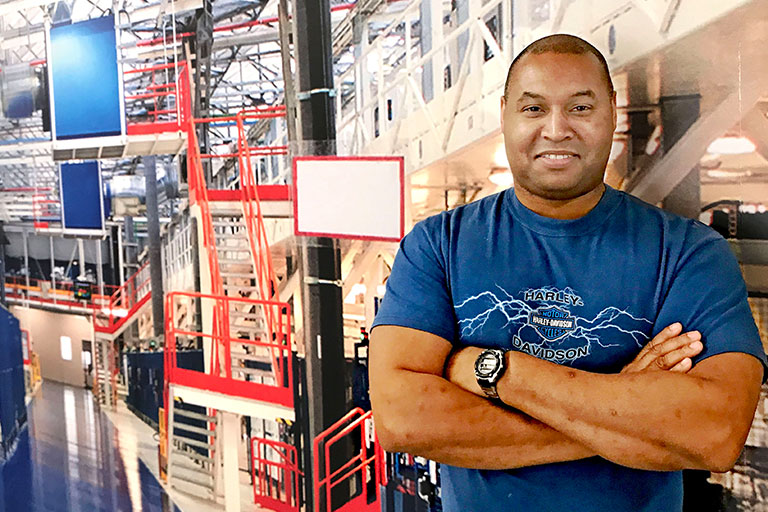 October is Manufacturing Month and Somerset Community College (SCC) is proud to train students for jobs in advanced manufacturing.

While earning an Industrial Maintenance Technology degree at SCC is the immediate goal of Terry Scruggs, his future plans are a whole lot higher ... and a whole lot faster. “I’d like to work for a company called Boom,” he says. The new business is building “a supersonic airplane ... a commercial airplane that goes like 1,700 miles per hour. It’s coming and that’s like the next step as far technology as airlines go and, for me, it’s like ‘Man, I would love to be a part of that.’”

Scruggs, a 39-year-old Berea resident, says the instruction he is now receiving at SCC is providing him with the foundation he needs to become an engineer and achieve his high-flying goal.

He is one of several people from industry taking part in the college’s KY FAME Advanced Manufacturing Technician program that combines college coursework with paid, on-the-job training and experience, as well as personal behavior and core manufacturing skills. The five-semester educational program allows those already employed in the industry to attend classes two days a week while continuing to work. Successful students earn an Associate in Applied Science (AAS) degree in Industrial Maintenance Technology - Advanced Manufacturing Technician Track.

“The thing I like the most about it (the program) are all the challenges they put on you as far as scholastic-type challenges because you’re learning something new every day and then they’re training you on it and they train you incredibly well,” he says. “I like it because it’s very personal (and) because I’m not a new student, I’m an old student compared to these young guys and they tease me about it.”

Scruggs was on the line as a temporary employee at Toyotetsu America, Inc. (TTAI) in Somerset when fellow worker Richard Snowden encouraged him to apply for the program. Another TTAI employee, Shenoa Merritt, also promoted the training.

“I brushed it off when I first met them,” Scruggs said, “but they were kind of adamant about it.” Both had recognized the worker’s interest in engineering at the factory.

“I have picked up things I learned from working with maintenance guys,” he said. “They would always pull me off of the line to help them figure out a problem because I enjoyed it and they liked working with me.”

Since applying for and being accepted into the SCC program, Scruggs has lost his sponsorship from the company. However, he says that “a portion of my education” is being paid through Workforce Innovation and Opportunity Act (WIOA) funding.

Scruggs says about half of the instruction he’s receiving is in the classroom and the other half is hands-on training.

“The hands-on is incredible,” he said. “The instructors I’ve had every semester are great. (They) never get tired of my questions and I appreciate that.”

SCC’s program is doing “a good job teaching and things that maybe I don’t have all the time to get into detail right now, I’ve got enough of a background and then I’m saving it so I can go back over it later, once I graduate,” he said. “That’s what I really appreciate to because it’s stuff that I can go back over again as far as notes and videos.”

Scruggs gave special praise to instructor Chris Bell, advisor Karen Plagge and SCC’s Vice President of Workforce Solutions Alesa Johnson. “They’ve been fantastic,” he said. “I couldn’t ask for better people as far as recruiting and then making sure that you’re on task and that you’re focused on your career.”

After he receives his AAS degree in May 2021, Scruggs says he plans to “transfer to EKU (Eastern Kentucky University) and pursue a four year degree.”

And, it’s with his bachelor’s degree in hand that Scruggs hopes to gain additional working experience—possibly at Toyota in Georgetown, KY— where he can “hone my skills and apply what I’ve learned in school.”  It’s with this experience that he hopes to have the foundation needed to enter the supersonic commercial airline field as an engineer.

As for taking his first steps toward this goal through SCC’s KY FAME Advanced Manufacturing Technician program, Scruggs says, “I would highly recommend it.”

To learn more about the KY FAME admission and program information, visit our website at somerset.kctcs.edu or contact Karen Plagge, KY FAME AMT Program Coordinator at 606.451.6934 or email karen.plagge@kctcs.edu.