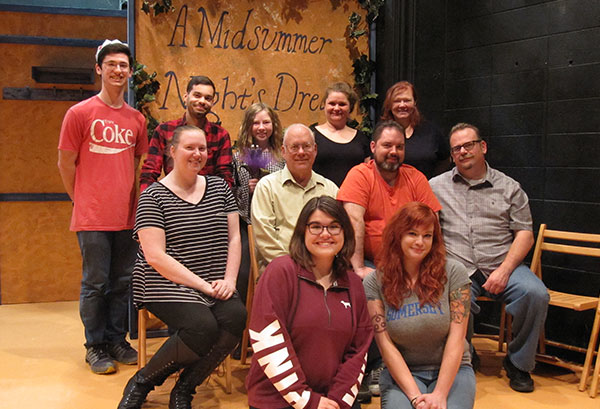 You like Shakespeare’s plays, but you wonder, do they need to be so stuffy? Somerset Community College’s (SCC), fall production of “A Midsummer Night’s Dream”, will be an innovative, fast-paced production that hopes to answer this question with a resounding “no.”

“The plan is to reach back to the traditions of Shakespeare and put them into modern terms.” States SCC Theatre Director Steve Cleberg. “This production will be a stripped down, lean and mean version of the Bard’s comedy.”

The concept is referred to as 12 chairs Shakespeare. The play begins with 12 actors sitting in 12 chairs.  These actors will remain on stage for the entire play. They will play all of the roles in the play depending on what hat or accessory they put on. The actors will take the audience on a lively journey through the world of one of the most popular plays of the greatest playwright who ever lived.

“A Midsummer Night’s Dream” will be adapted for this special format and will be played without intermission in less than 80 minutes. In homage to the original productions, the actors will be cast without respect to the gender of their characters. In many cases, men will play women; women will play men.

The twelve players who will present this unique version of Shakespeare include Theresa Kibby and Martha Pratt in dual roles. Pratt will play the roles of Theseus, the Duke of Athens and the king of the fairies, Oberon.  Kibby will take the roles of the female counterparts, Theseus’s fiancé Hippolyta and Titania, the queen of the fairies.

Popular local actor, Greg Moore will play the role of the ham actor, Bottom, who finds himself transformed into a comical beast who becomes the center of the affections of Titania. He will also portray the role of Pyramus in A Midsummer Night’s Dream’s iconic “play-within-a-play,” Pyramus and Thisby.

The role of the young lovers who escape to the woods only to come under the spell of the fairy king will be played by Joel Brinson, Ashlyn Summers, Trey Bray and Emma Coomer.

The actors who play the fairies in attendance to Titania will also play the roles of the comical rustics who present the hilarious play Pyramus and Thisby at the wedding of Theseus and Hippolyta at the end of Shakespeare’s classic comedy. Tiffany Warren, David Daring and Amber Frangos will take on the task of transforming from one group of characters to the next.

Rounding out the cast is SCC stage veteran, Chris Harris, who will play multiple roles including the father of one of the young lovers, an amateur stage director and aw wall. Newcomer to the SCC stage Livia Keith will play the role of Oberon’s sidekick, Puck.

One of Cleberg’s long time collaborators, Leann Perlowski, will choreograph the dances. She has worked on such previous SCC musical productions as Godspell, Fiddler on the Roof and Tin Pan Alley Tavern.

For more information contact SCC Box Office Manager, Theresa Kibby at 451-6766 or by email at Theresa.Kibby@kctcs.edu